The Nigerian Army has confirmed the air strikes on some communities in the Essien Udim Local Government Area of Akwa Ibom State.

NAF in a statement released on Wednesday disclosed that the ground and air team carried out an attack on criminals who had acquired dangerous weapons in Ntak Ikot Akpan.

The Director, Army Public Relations, Brig Gen Mohammed Yerima, on Wednesday said the community was bombed because “in the past few weeks, the group has attacked various security agencies which resulted in the loss of lives and carting away of weapons. The last incident led to the killing of some policemen including a Chief Superintendent of Police.”

The army spokesman said, “The general security situation in Akwa Ibom state has been very peaceful until recently when the security situation around Essien Udim Local Government Area of the State became tensed occasioned by activities of some hoodlums and criminal elements. The miscreants exploited various avenues to acquire weapons to perpetrate their heinous crimes. In the past few weeks, the group has attacked various security agencies which resulted in the loss of lives and carting away of weapons.”

“The last incident led to the killing of some policemen, including a CSP. The hoodlums continued to terrorise law abiding citizens through extortions and infringement on their rights.”

“Consequently, a combined team of Military and Security Agencies in the State conducted a clearance operation at Ntak Ikot Akpan in order to flush out the miscreants. The operation was successfully executed and resulted in the dislodgement of the criminals while fleeing hoodlums were neutralised by the Air Component.”

“Normalcy has been restored in the area while the Police personnel have since assumed full control and carrying out normal duties. Members of the public are advised not to panic but to remain calm and continue to support the security agencies to further consolidate on the successes recorded so far.”

Woman Discovers Her Son’s Bride is Her Long Lost Daughter

The Paradox Of Buhari and Kanu: My Dilemma as an Igbo man

There Is An Attempt To Sabotage Buhari’s Government

Former Abia State Governor, Orji Uzor Kalu on Monday said with the myriads of security challenges in the country, it’s clear that there is an attempt to sabotage President Muhammadu Buhari’s administration.

Speaking during an interview on Channels Television on Monday said the Senate Minority Leader and senator representing Abia North in said the Federal Government is not responding as it should.

Kalu, who was also ex-governor of Abia State, called on the Federal Government to collaborate more with governors in nipping in the bud the various security challenges in the country.

“Anywhere you have no police to police the society, it means the society is failed because the major job of a government is to protect lives and properties of the citizens. Once that kind of aspect fails, we are in trouble,” he said.

“I believe there is sabotage to the Presidency of Muhammadu Buhari. A lot of sabotage, things are on duty to sabotage him, the society.

“The Federal Government should cooperate with the state governments. We have done well as a party in many areas but security is key and we need to address this issue, come together.”

On the way forward, he asked President Buhari to tackle the numerous security challenges in the country to convey a security summit with the service chiefs, governors, selected ex-governors and former military personnel. 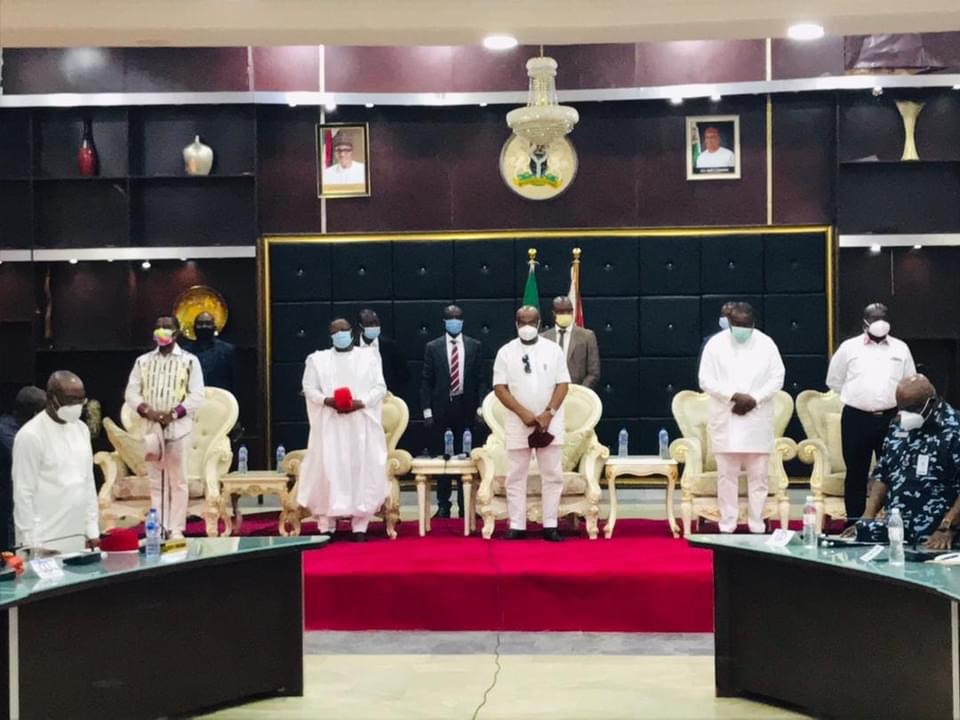 After exhaustive discussions on the current security challenges in the South East and with valuable contributions from participants at the first South East security summit in Owerri on this day Sunday April 11th 2021, it was resolved as follows:

A Lagos businessman, Adeleke Adeyemi, has been arrested by Lagos Zone of the EFCC for issuing dud cheques to cover N800million loan given by Ecobank.

EFCC spokesman, Wilson Uwujaren, in a statement on Friday, April 9, said the suspect is also being accused of conspiracy, obtaining money by false pretence, diversion of funds and money laundering.

It was gathered that the accused, along with his accomplice, Odusanya Ayotunde Memphis (now at large), are directors at Wafa Aggregate Limited. Together, they approached Eco Bank Plc for a loan of N800million for the procurement of petroleum products from Covalent Oil & Gas Services Limited in October 2011.

Upon receipt of the loan, Adeyemi and Memphis allegedly diverted the funds to their personal use and defaulted in paying back the loan. Investigation revealed that the five Diamond Bank Plc cheques of N10million each issued by the suspect and his accomplice were returned unpaid upon presentation.